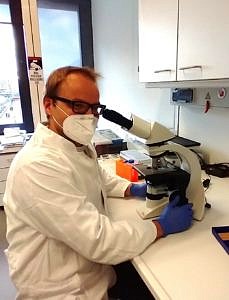 The functional subunit of kidney, the nephron, consist of a filter body called the glomerulus which prevents filtration of high molecular weight proteins from the blood, and the tubule which recycles smaller molecules and water from the primary urine. The podocytes are the epithelial cells of the glomerular kidney filter and their impairment leads to leakage of the filter with loss of serum proteins into the urine, a state called proteinuria. The respective human disease is called nephrotic syndrome and the initial therapy with steroids distinguishes between steroid sensitive and steroid resistant nephrotic syndrome. Although used since decades, the mechanism behind steroid action on podocytes remains unclear to date.

Wnt/β-catenin signaling is a biologically highly conserved cellular signal transduction pathway that has important functions in embryogenesis, cell proliferation, cell differentiation and migration. While Wnt/β-catenin was often being associated with functional impairment of the kidney and damage of podocytes in the past, recent publications indicate an important role of Wnt/β-catenin signaling in cellular renewal. It has been shown that the Wnt/β-catenin pathway is essential for regeneration and repair of tubular damage in acute kidney injury. In contrast, constant activation of Wnt/β-catenin signaling in chronic kidney disease leads to progression of the disease, so that in this case β-catenin inhibition may have protective effects. Thus, Wnt/β-catenin signaling can have differential influences on kidney diseases dependent on activation time and intensity. Moreover, we have shown previously in podocytes that the location of β-catenin within the cell is important as well, with membranous β-catenin being protective but nuclear β-catenin causing cellular dedifferentiation and dysfunction of the glomerulus. Recently, we established that loss of the gene MAGI2 in zebrafish causes a type of nephrotic syndrome that reacts paradoxically on steroid treatment with accelerated disease progression upon treatment.

With this proposal, we aim to investigate how we can promote the beneficial function of β-catenin in both glomerulus and tubule. Firstly, we will test compounds in a podocyte cell culture model for their ability to strengthen the protective membranous β-catenin localization in podocytes in order to reveal potential novel treatment options in nephrotic syndrome. Secondly, we will employ mouse and zebrafish knock-out models of the gene MAGI2 to better understand the mechanism behind steroid action on podocytes and to ultimately find more specific drugs with less side effects. Lastly, we will use tubular cell culture models and proteinuric mouse models to determine how proteinuria activates β-catenin in the tubule. These insights may help us to establish a second tubular point of action in treatment of nephrotic syndrome. To prove the clinical relevance of these findings, some of them will be confirmed in clinical human specimen.