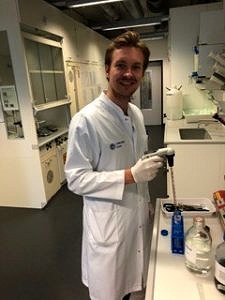 The glomerular basement membrane (GBM) is part of the three-layered glomerular filtration barrier which is pivotal for kidney ultrafiltration. Defects in its core components are associated with symptoms of impaired filter function such as hematuria and proteinuria and lead to a decline in kidney function. Mutations in genes encoding type IV collagen, one of the GBM’s core components, are known to be causative for the human diseases Alport syndrome and thin basement membrane nephropathy (TBMN). Whereas progression to end-stage renal disease is regularly seen in patients with Alport syndrome, TBMN usually has a benign clinical course.  However, there are several reports of impaired kidney function and relevant proteinuria in patients with TBMN. Epidemiological studies have suggested that the presence of the R229Q missense variant in NPHS2, the gene encoding the podocyte specific protein podocin, predisposes for a severe course of disease in TBMN patients.

Our group has recently discovered a correlation of albuminuria, the main symptom of essentially all glomerular diseases, with the decrease in filtration surface and certain morphological parameters in a genetic mouse model resembling a late-onset form of hereditary Steroid-Resistant Nephrotic Syndrome (SRNS). In this model, the combination of two missense variants (murine: R231Q, A286V; human: R229Q, A284V) in Nphs2 lead to progressive morphological alterations of podocytes eventually resulting in podocyte loss and the development of focal and segmental glomerulosclerosis (FSGS). In the current project, we would like to investigate whether the correlation of albuminuria and morphological alterations can also be observed in type IV collagen-deficient mice. To this end, we will analyse Col4a3+/- and Col4a3-/- using super resolution STED-microscopy and functional measurements. In addition, we will cross Col4a3+/- and PodocinR231Q mice to verify whether the combination predisposes for the development of proteinuria and decline in kidney function as was suggested by observational studies in patient cohorts.